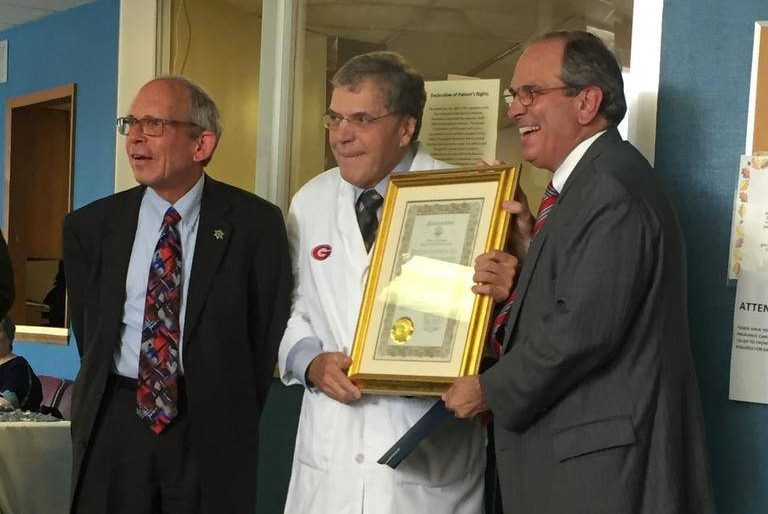 The day is coming when Dr. William P. Brooks will retire, and he’s wondered if his medical practice might fade away.

And that’s bothered him.

On Thursday, though, officials announced a partnership that will help allay those concerns.

Brooks has been serving south Macon residents around Houston Avenue since 1975.

Navicent Health gave First Choice Primary Care a community health grant to help with the transition, said Elbert McQueen, senior vice president of Navicent Health. The grant was for $150,000 to fund the cost of computers, an electronic health record system and equipment upgrades.

Now, “Dr. Brooks will be able to expand access to care for new and existing patients with the addition of a nurse practitioner, direct access to nursing patient education and technical support,” Reichert said.

Brooks said that if he had not received the help, he would have had to quit.

“Until I started the conversation with Navicent and First Choice, no one was interested in helping,” he said.

McQueen said that when Brooks does decide to retire in couple of years, the transition will be seamless.

“Navicent Health’s decision to partner with First Choice Primary Care and South Macon Family Physicians is but one facet in a larger plan to improve community health and reduce health care disparities throughout Macon-Bibb County,” said Starr Purdue, chairman of the Navicent Health board of directors.

The clinic is located in the southern part of District 2, and it has a host of challenges, Commissioner Larry Schlesinger said.

“I’m very pleased that Navicent is extending its footprint here in the community of this neighborhood,” he said.

Schlesinger said he has often described this part of south Macon as a forgotten neighborhood.

“I really love these people,” Brooks said. “I spent the best part of my life out here, and I’d like to see it continue.”

South Macon Arts Revitalization Technology is an organization that strives to help change the perception of the south Macon community. The group also presented Brooks with a certificate of recognition at the ceremony.

“When we set out to change that perception in our community, we want to find the assets in our community,” said Antonio Lewis-Ross, the group’s president. “One name that always came up was Dr. Brooks.”

Schlesinger called Brooks one of the community’s unsung heroes.

“A lot has changed in medicine since 1975, but you’ve still got dedicated physicians who have the best interests of their patients first,” Reichert said. “Dr. Bill Brooks is certainly one of those.”