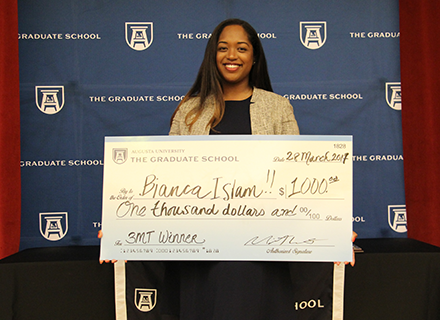 The 3MT competition was originally founded by the University of Queensland Graduate School as a way to encourage students to effectively explain their research to a non-specialist audience. The idea came about during a drought in the state of Queensland, residents were encouraged to time their showers so many people had 3 minute egg timers fixed to their wall.

The Graduate School 3MT competition included 5 finalists, one of which was Bianca Islam, the winner of the 2017 TGS 3MT competition. She recently competed at the 3MT competition in Fayetteville, AK and won the People’s Choice award for her heat. She offered some advice to the new students competing in the 2018 competition: Don’t wait until last minute and start practicing your presentation whenever you get the opportunity. Islam said she really felt like the faculty and staff dedicated to the 3MT were a big help with not waiting until the last minute. They had deadlines and set dates when things would need to be done but it does take some time. She also said she took every opportunity to practice her speech, even just talking one-on-one with someone. She said to try and make it less like a script and more like a conversation or discussion, that way if you mess up it’s not really like you messed up at all. One other suggestion she had was to make sure you prepare the day of the competition as well. Go to the facility ahead of time to see what it looks like, try your slide on the projector and try the microphone on. All of these things go a long way to feeling comfortable on stage.

Over the last year Islam has done several other presentations including an oral presentation for the American Physician Scientist Association Regional meeting in Atlanta, GA. She competed against students from the University of Alabama- Birmingham, Emory and Vanderbilt. She was chosen to present based on her abstract and won the competition.

Islam said one thing that was really great about the competition is that it gave her an opportunity to view her project in a different way. She feels sometimes students think their work is too complicated for someone outside of the science community to understand but there are so many benefits to being able to explain your research in a way people can relate to. Not only does the scientist have the opportunity to see the impact of their work and see that it goes to a greater purpose but also to be able to advocate for your research and the reasons why it should be supported.