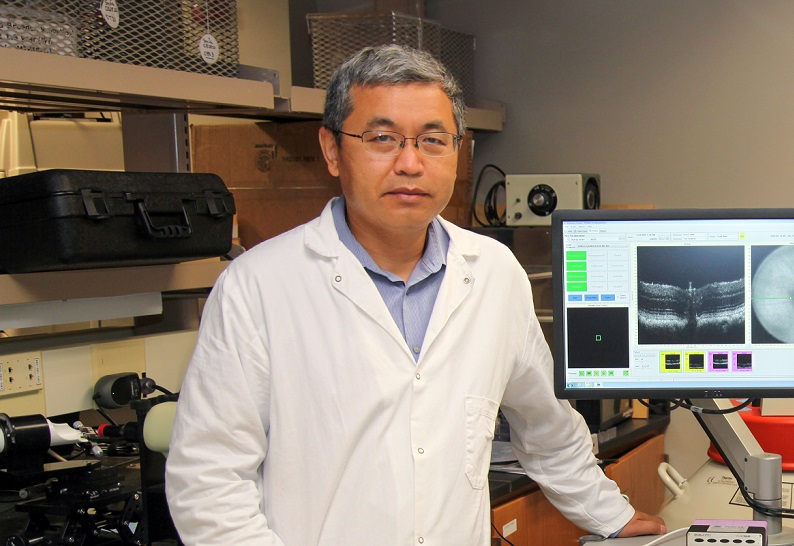 Alzheimer’s, a devastating neurodegenerative disease, affects one in nine people over age 65 and is the most common cause of dementia. It impacts the thinking, behavior and basic social skills of approximately 5.5 million people in the United States and 44 million worldwide.

Fortunately, scientists at Augusta University’s Medical College of Georgia are conducting targeted research around the pathogens that cause Alzheimer’s. One such groundbreaking study, led by principal investigator Dr. Xingjun Fan, caught the attention of entrepreneur and philanthropist James Fickel, motivating him to establish the James Fickel Alzheimer’s Disease Research Fund with a gift of over $750,000.

Fickel is interested in supporting “research that furthers our mechanistic understanding of the diseases of aging.” He said he believes that “Dr. Fan’s group is doing great work that’s aligned with that goal.”

An associate professor in the MCG Department of Cellular Biology and Anatomy, Fan and his research associates are studying the pivotal role of glutathione (GSH) in brain aging. Deficiencies of GSH have been found to cause neurodegenerative disorders in both human and animal models. The MCG researchers have been able to create a mouse model with GSH synthesis deficiency. This is groundbreaking work that could offer great promise to many.

According to Fan, Fickel “clearly sees that we live in an aging society and particularly wants to support research that furthers our understanding of the diseases caused by aging. Fickel’s philosophy is that we must begin working on solutions now if we expect to live in a healthy tomorrow.”

Fickel has a background in computer coding and an interest in the intricacies of cryptocurrency, which have helped him achieve great success in this niche segment of investment and finance. He has a philanthropic interest in healthy aging despite his relative youth. (He is not yet 30.)

After reading a proposal about Fan’s research, Fickel’s interest was piqued. The investor and the scientist met virtually, and Fan shared more details about his discoveries and plans. Fickel decided the MCG research holds great potential and that Fan and his team are on the path to developing a much needed and promising breakthrough in Alzheimer’s research.

Fan said that he and his research team at MCG are humbled to receive this funding from Fickel.

For more information on how you can help support Dr. Fan’s research or other Augusta University programs, please email Philanthropy@augusta.edu or call 706-721-4001.